Their names came up in the last entry, so it seems like as good a time as any to introduce my other set of great-great grandparents, the MacGregors. So let’s meet these crazy kids! 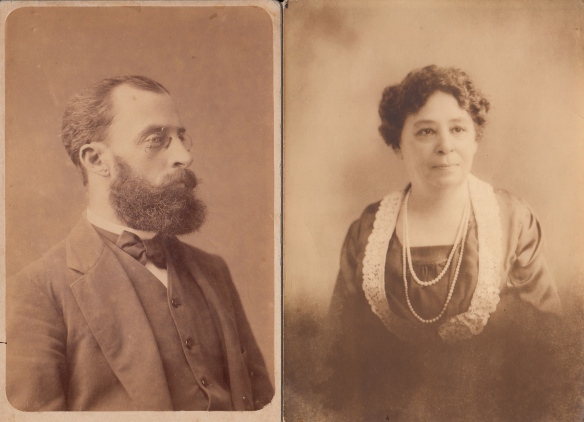 William Wallace MacGregor was born in 1851, in either New York state or New Jersey.  Anna Jones was born in Texas in 1862. I find myself wanting to double-check these birthdates—there’s quite an age gap between these folks and the Jameson great-greats. Then again, the back of Dr. MacGregor’s photo says it’s from 1886, and he does look like a 35-year-old there. Anna’s photo is probably from the early 1900s.

W. W. MacGregor was a doctor, and, I think, the son of a Scottish or Scotch-Irish immigrant. As for Anna, she seems to have attended college—we found a notebook of hers from Wellesley—and it’s through her that the family line can be traced back to the 1600s.

(Forgive the vague details: we have more information on these folks in some boxes in Albuquerque, and I’ll add/correct things when I get a chance.)

The MacGregors lived in Laredo, Texas, during the early 1900s. They had five daughters. You’ll meet them in a bit.