My great-great grandmother Anna Jones, likely during her college days (back of picture has name of a Boston photographers’ studio)

In 1882, Anna Jones was 20 and attending Wellesley College, a long way from Corpus Christi, Texas. I suspect her Jones relations had something to do with her going to school up near Boston, since her father’s family had some New England roots. One of Anna’s uncles, Alonzo Jones, was a ticket agent for the Old Colony railroad, and appears to have made some of her travel arrangements (at least from what I can make of his letters to her, which isn’t much on account of his CRAZY handwriting), but other than that, I haven’t uncovered much about those Wellesley years. Did she graduate? Did she live in the dormitories? (I’m guessing she didn’t live with Uncle Alonzo, since the 1880 census shows him living in a boarding house.)

However, I did find three of Anna’s notebooks from her time at school. Two are academic, and oneus  a “commonplace book” full of quotes and verses she wanted to remember. It’s marked 1882 and “Private.” (134 years later, we are totally snooping.) 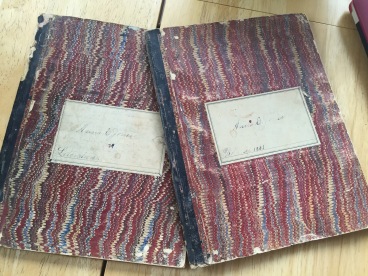 In each page of her commonplace book, Anna drew a line down the left margin with her pen and ruler, creating a tidy column for citations. On the very first page she began with quoting a lot of Spenser’s The Faerie Queene. (Oh, college.) On subsequent pages she quoted Byron, Lowell, Longfellow, Pope, Shelley, and then went on a Shakespeare kick for about two pages, occasionally making little x‘s over the verse lines to figure out the scansion. She tended to nerd out on passages about art, books, eternal truths, death. As one does at twenty.

Halfway through the notebook the material starts to get a little more eclectic. Anna left off quoting the (mostly male) classic literary canon for awhile in order to transcribe a popular poem by Mary Torrans Lathrap, a women’s suffragist and temperance activist. “A Woman’s Answer to a Man’s Question,” has fun lines like A loving woman finds heaven or hell/ on the day she is made a bride and takes the view that a woman’s love is too valuable to be wasted on jerks who only want someone to cook and clean for them. Respect!

Then there’s THIS little gem called “Recipe for a Harvard-Man,” and which appears to have been something of an 1880s meme.

“Take a lump of Egotism:
Add a slice of Skepticism;
Mix them well together with a ‘culchawed’ Boston drawl;
Add a little Darwnism,
Just a smack of Positivism
And flavor with the essence of unmitigated gall.”

I managed to find the rhyme in three or four college publications around the country in the 1880s, and I wonder how many girls’ notebooks it wound up in.

But by far the cutest/most embarrassing thing in Anna’s notebook is a poem attributed to “L.B.E,” and dedicated to “K.C.,” both of whom were almost certainly Anna’s schoolmates, and is about poor Kate (K.C., we presume), who sat in the front row of a concert and made mutual flirty-eyes with one of the male singers:

I sing not of war or of a hero
My subject is of our dear Kate,
Who to our everlasting sorrow
At the Concert met her sweet fate
She sat, an innocent victim,
Right down on the very front seat
When lo: before us he sing
A sweet warbler arose at her feet.
In a way that is now quite the craze,
But we could see in his sweet eye
As he looked & met her shy gaze
The words of Caesar veni, vedi, vici
We all know how sweet is our Kate
And to contradict it I do hate;
But often a fear has come of late
That to become more sweet is her fate.

So many questions! Who was L.B.E? Did Kate and the guy ever hook up? Was he from Harvard? Was rhyming eye with vici some kind of droll 1880s schoolgirl joke? Did Anna ever sit in the library with this notebook, copying all those lines? Did she remember them later? 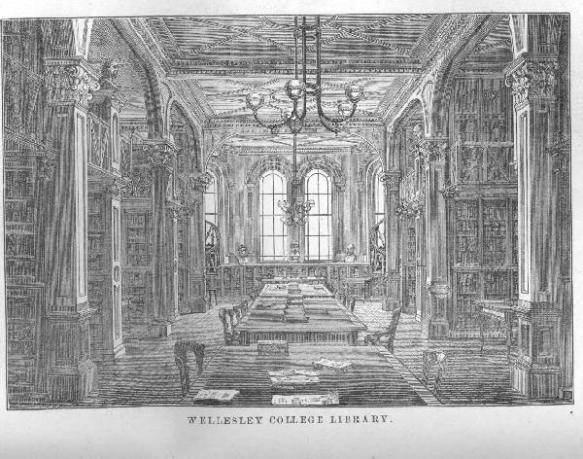