In honor of Mother’s Day, all the mothers in my mother’s line whose photos I could find in the family collection, though the documentation on some of them is pretty scanty. See notes! Married names are in parentheses.

Ann (or Anna, I’ve seen the names both ways) is Anna Jones’s grandmother, according to the note that her daughter Anna MacGregor Collins (got all those Annas straight?) left with this photo. Lived in New England—Vermont and Connecticut.

Name information for Catherine’s photo was handwritten on the envelope I found it in, in a handwriting I don’t recognize, with additional note: “Grandmother of William Wallace MacGregor.” The genealogy information I’ve found so far seems consistent with this—she would be his maternal grandmother.

This one is the most baffling so far: it’s a matted photo reproduction with a note on the back, “Hannah Dayton Conklin / my g. grandmother” in handwriting that could be Anna Jones MacGrergor’s. Beneath that, someone—my grandmother I think—penciled in “Aunt Kathryn’s gr-grandmother,” meaning my grandmother thought it was Kathryn MacGregor Burgess’s handwriting. Complicating things is the fact that there is another “Hannah Dayton Conklin” in the family, on the Moore side, though this photo doesn’t look quite the right generation. So I can imagine three possibilities for who this is:

1.) Hannah Dayton Moore (Conklin), who was the “Aunt Hannah” to Anna Jones, or…

3.) A Hannah Dayton Conklin, who might be Harriet’s mother (and thus Anna’s great-grandmother, and my 5th great-grandmother), for whom no corroborating record has been found yet. SO WHO KNOWS. 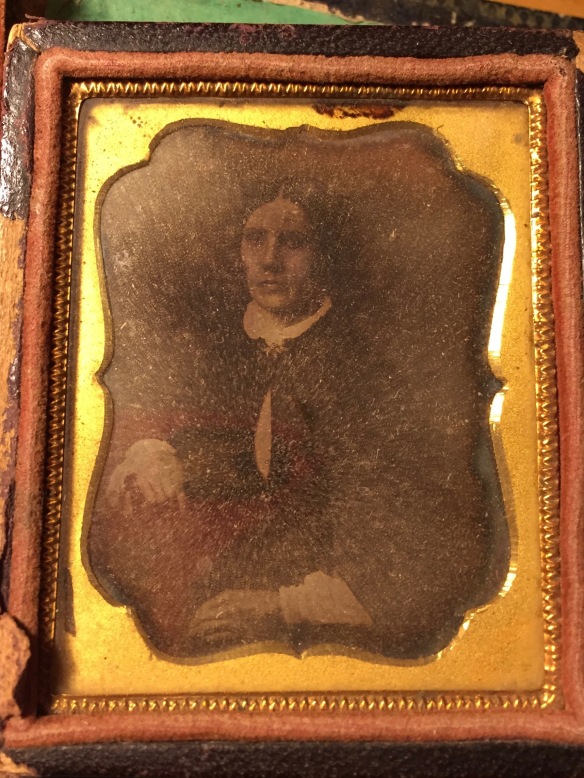 Another mystery one: accompanied by a slip of paper in Anna Jones MacGregor’s handwriting that said “Grandmother MacGregor.” I had thought for awhile that this was just another photo of Anna Kingsland MacGregor (see below), but upon closer inspection it seems that this is a different woman, and if Anna called her “Grandmother” she could be Catherine Clark MacGregor, who I think is Dr. MacGregor’s grandmother, and who may have come over from Scotland in the 1840s. 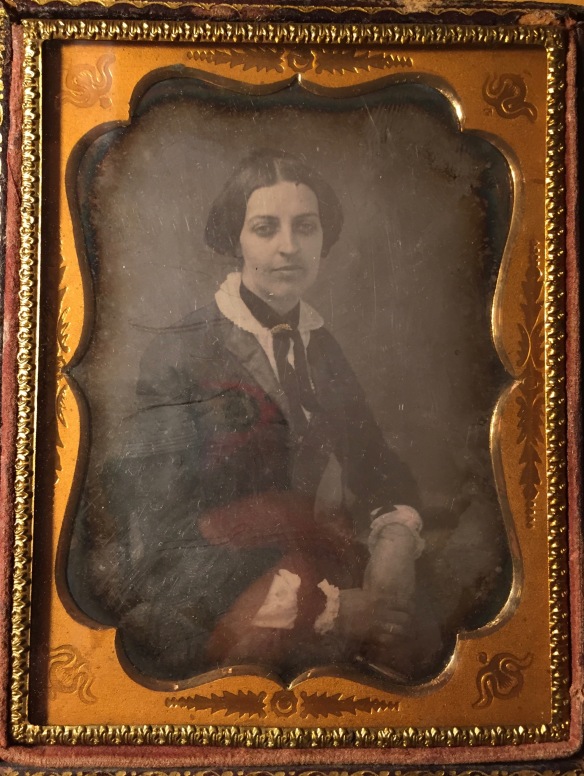 This photo (one of two that I have of her) came with a label written by Anna MacGregor Collins. She’s Dr. MacGregor’s mother, and apparently the daughter of Catherine Van Winkle Kingsland. (Secretly I call her “Spooky Eyes.”)

This photo was taken in Corpus Christi, Texas (per the info on the back) and while it’s not labeled as Mary Anne Moore, the woman closely resembles other photos identified as hers. This was the mother of Anna and her two sisters (Harriet and poor Maggie). 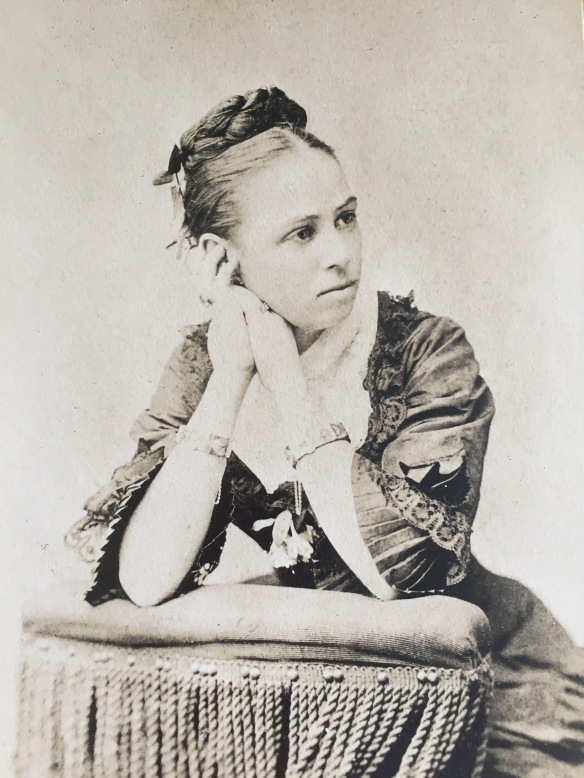 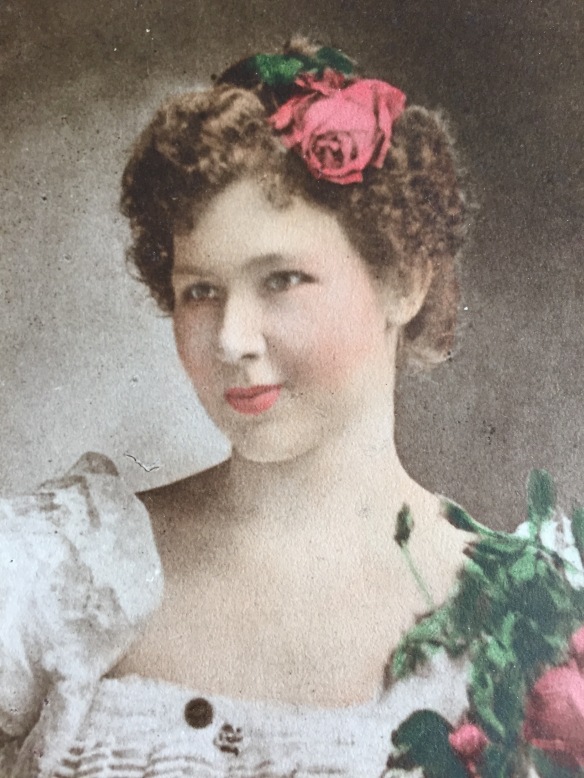 Finally, one from the Jameson side! Here is Ammie Routh Jameson, later known as “Jamie,” wife to Joe Lee Jameson, mother to Malcolm, House, and the first Vida Jameson. 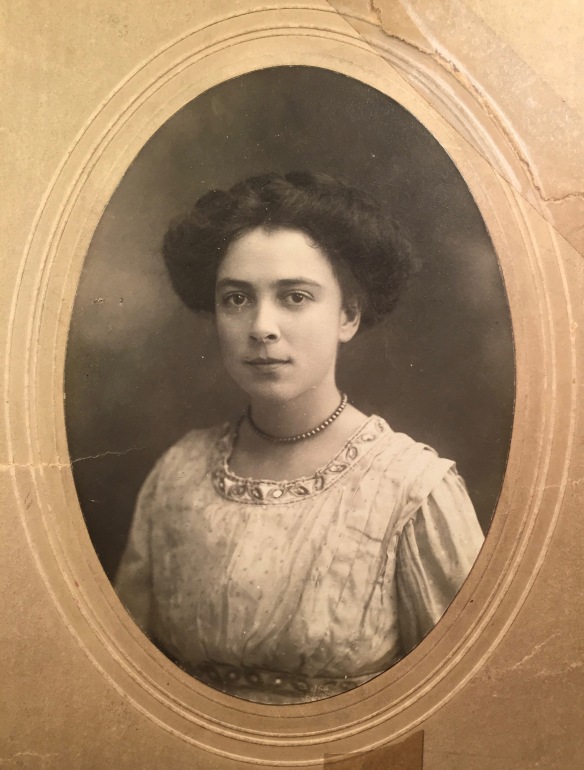 My great-grandmother Mary, who my mother’s family referred to as “Nana.” She would have been in high school here.

And then… Aldona, my grandmother, known to us as “Steve,” based on her endlessly morphing Lithuanian maiden name, which appears in records at various times as Stephens, Staphan, Steponaitis, and Steponauskas. She married Grandpa Mac, and their first child was my mother, the baby here. This photo was taken in New York, on the upper West Side I think, and she likely sent this, or photos like this, to Mac while he was away in the Army in World War II.

She looks gorgeous in this picture but believe me when I tell you she was hell in high heels.